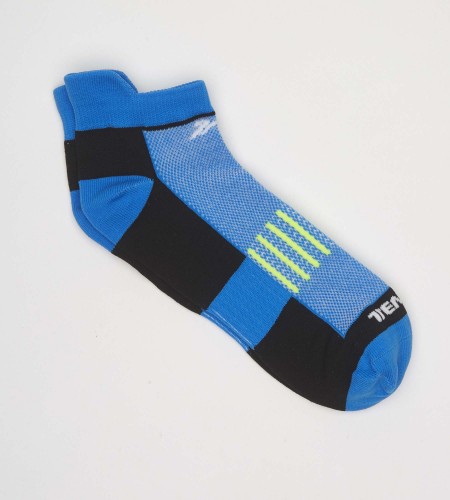 Today I’m going to talk about a purchase with which I was super happy. A purchase that could be called accidental, not difficult. When I arrived at the Décimas store, my intention was not to buy a Pinki Running Sock, then I did not even know that the Pinki Running Sock existed.

My visit to Décimas was forced to buy some sneakers from one of my sons. Everything would have ended there, would you bring me that number?, or better that one, but no, everything was more complicated, since the boy did not wear socks. Now it has to explain that this has not happened this week, nor that I am an unconscious father who takes out from home his children without socks in winter. This story happened late in the summer, but so far I have not been able to talk about the socks. I had to try them at least a number of kilometers to give an opinion.

Looking for I was faced with the Pinki Running Sock. And as it was written they were to run, I said to myself: that’s it, I take these, and then I buy them, that a pair of socks are never wrong. It also helps that your child almost fit a 41, and then the socks of size 43 to 46 are not so large for him. The first thing that surprises me when I see them, is that despite being called Pinki, they are blue, have nothing to do with color Pink.

Seriously, they do not have the left and right markers to fit better anatomically. I do not care much, also it is certain that I do not presume much of blisters, and for that reason it gives me a little equal the markers of the leg. It is true that the first sensation when wearing them is wonderful, they are very comfortable, and stay well coupled.

This feeling stays even as you run. The sock holds the foot tightly, and does not move. Once its use is finished, fear comes, washing, how will they come out of the washing machine?. Have they lost their softness?. But no, they are still soft socks when wearing them like the first day, and pleasing to the skin.

But not everything can be good, it is a sock that is not made of one piece, it has seams. So all you than have fears for your possible blisters, do not surprise with them seams. This it’s no a problem to me, nor has it involved any handicap, I haven’t had discomfort, nor has it produced blisters. So I can not be more glad. The only thing is that once they are soaked, they are absolutely soaked, they do not dry fast or much less, at least in my case, after getting wet from the water, they were soaked for the rest of the training.

I have been using them for about 250 km, staying as I said earlier comfortable when putting them, and very smooth in contact with the skin. Those kilometers have been between workouts and two races. The races have been one vertical kilometer, and one race of 25 kilometers. In both I have not suffered discomfort, nor have I been lowering my socks, my impressions are good, but it is also true that as I said the maximum have been 25 km.

In short, cheap socks, which are great for training, or short races, for races of more than 25 km I can not give a real opinion. But with this price, little else you can ask for. More information on the web of décimas.