Dear diary, today I woke up wanting to run, and that’s the most important, the best attitude for a runner, look forward !. Today September 17, I have wanted to run. But this is only an idea, a dream, or rather the beginning of a dream, I hope not a nightmare, or end up becoming one.

For starters, I get up excited, i have a breakfast, I dress up, and I’m going to work, when i had previously faced the harsh reality that the summer is leaving us, although not yet reached the Fall, but the temperature does not permit us to doubt. While I’m on the train track work, i stroke the mindset of my late afternoon to dedicate a small little run.

But now is when I laughed, I laughed and cry: lie!, this is called mindset for something, because it is only mentally, compared to reality is like comparing myself to my Anton Krupricka. Ie little resemblance, both are guys, we run, sometimes I have a little beard, … well I have more resemblance to Krupricka  than my mindset with my real late. 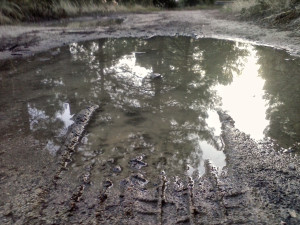 As we can see, any resemblance between my mindset with the actual race today was pure fiction. But the strangest thing is that surely after this traumatic experience, I will rise again tomorrow thinking about running.