Inicio Paths From dam to dam i move as i choose

From dam to dam i move as i choose

If a week ago we were running through the Sierra de Guadarrama and admiring their reservoirs, I have to confess that this past Sunday, I ran the same mountains, but also kept admiring and wandering through the reservoirs of it. This time it was the turn of theNavacerrada’s Dam, but this time if I was running along the shoreline, and the Maliciosa’s Dam. Because we are like in the goose game, from dam to dam I move as I choose.

But to reach the Navacerrada’s Dam, first I had to run down the slopes of Cerro del Castillo, in the area of ​​Hontanilla, with a few plain kilometers to warm muscles at that hour of the morning, but after a kilometer and a half more or less, we turn off on a path that goes down to Collado Mediano to immediately climb to Cerro del Castillo (1339). From this moment we drove through the small rope of the Cerro to the Reajo del Roble.

Arriving at Reajo, we cross heading towards the Dehesa de la Golondrina, although we will not get into it, but we crossed the M-601 to get into the grounds of the Navacerrada’s Dam. And ignoring the signs of No Bathing (and also the temperature at this time of the morning), I decided not to bathe, and I just ran around it. 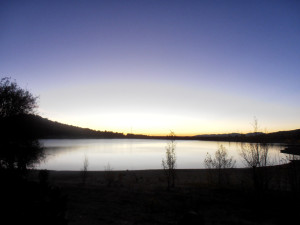 Let surrounding the dam and across the streams that flow into it as we head toward the exit that leads to the Alto del Hilo. But before arriving it we down to the Almorchones by the Vereda de las Cabezas, to continue down by the Camino del Dedo y la Casilla de los Prados de Capilla. Before reaching Cercados del Guerrero, we go to the left towards a gravel, and continue surrounding the urbanization Vista Real, start climbing into the Maliciosa’s Dam. 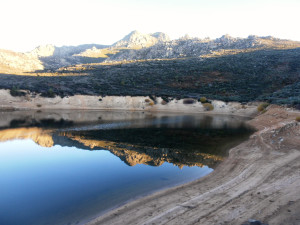 We started the climb, first on a paved road, but after four turns,we leave this road to follow a path through the forest for about a kilometer, the area of ​​Corral de Peña Jardinera while accompanied the Arroyo Chorreras, until we arrived at the end of the climb, but we continue a little further to the reservoir of the Malicious (1410 m.). We stay at the Malicosa feet, but with very little water due to the time of year where we are, and the few recorded rainfall.

After drinking some water, we started down the dam, but now the track has quite loose stone, and a drop quite pronounced in some areas. At the end we join the track of the beginning of the run, and return by the same route to the gravel pit, only instead of back on the Camino del Dedo again, we crossed the M-607 and back through the pine forest which is located Across the road, in the area of ​​Horcajos.

This road is in slight increase, but protected by a pine forest, and this constant continuous rise as if we were to Cerro de las Cabezas, but we turn prior to the Navacerrada’s Dam, only this time we returned by the other side, by the base of Cerro de las Cabezas, and so we crossed the dam, then also cross the M-601 to return to the starting point after just over 20 kilometers.

As always we leave the track of our route