In heat wave, I choose to go to La Granja to look how I am for the VK-22 Peñalara, as in recent weeks, due to some causes, illnesses, or work, almost had not gone running, and my intention was to see if i can run the race or not.

To shun the heat, I go to La Granja early, I am at 7:30 starting to run, next to the bullring, and always uphill then running to the side of the wall of Los Jardines de la Granja, until El Esquinazo, turn around, and go down to the Fuente de la Plata, this is the first down we have, and we better enjoy it, because from there, we get into a continuous rise in the area of ​​el Cebo, el Balconcillo, Majalapeña, and now we got out of the way with an average gradient of 20% to la Silla del Rey in the Cerro del Moño de Tía Andrea.

Carved in rock and used by Francico de Asis de Borbón, on August 13, 1848, as written in his support.

Since here we began another short descent back to the Vado de Oquendo, but we did not arrive and before that we began to rise again next to Arroyo del Cañón, the Salto del Corzo, until the PR -15, continue up a little more to el Accidente until we started down the Raso del Pino, where the weather station is.

From here we follow a relatively easy terrain in slight descent to the Majada del Tío Blas. Take to send you to the Wikipedia, in case you want to know what exactly a majada. 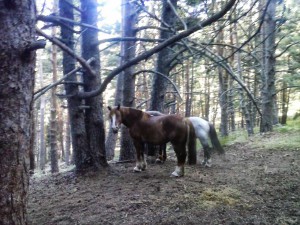 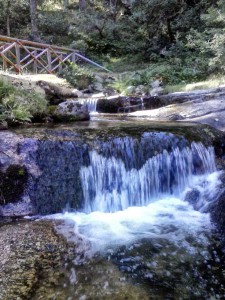 We cross el Arroyo de los Carneros, and began a continuous descent to La Granja, along a path with a nice view and which are stored in our retina. In this path we are lucky to meet some horses and some cows, but we continue downhill towards La Granja wall.

At the bottom tired, we have to go back up to El Esquinazo, to below tirelessly continue with the next rise that leads to the Fuente del Infante.

This is where we note the inactivity of the past few week, and the increasingly high sun, do we make the decision to turn around, so the area of ​​the Peña del Berrueco, cross el arroyo Peña del Berrueco, and joined the road down from the Fuente del Infante, to return in a continuous descent to the Bull Ring, and to end the race.

With great sorrow in our hearts, but the sensations obtained today, make us rethink the race VK-22 Peñalara, and leave it for another suitable time.