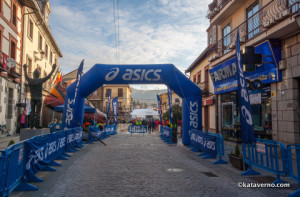 Sunday morning at 8, I’m waking up, beginning to dress. And why I get up on a Sunday at this hour? Good question, I could be enjoying my bed, a peaceful rise, but sometimes humans are crazy, we got up early, and only to suffer (some) and enjoy others.

It is the day December 13, 2015, and this year a little earlier, we have the Cercedilla’s Christmas Race 2015, a race that has already become a tradition in this part of the mountains, and with XII editions in its history we can say that the last of the Asics Trail Series, is a veteran absolute (I don’t know if A, B or C), in the form of Mountain Races.

Breakfast at 8:30, because I do not like to run on an empty stomach, maybe I will get hungry during the race, and I stop for a drink at a café, and go to Cercedilla, where I arrive at 9, a hour and a half before the race, but the atmosphere is festive. There are many people on the street, a suspect arc in the Plaza Mayor, too many people with sportswear … Yes, it seems that here is the race. 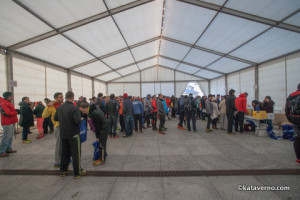 We go to the tent where the closet is enabled, and where we can collect the dorsal, at this hour, it’s no problem, we can if we want to looking for us on the outside boards to find out what is our number. Once identified, we collect the dorsal, no queues, and bag of presents, also without problems or worries, I imagine that the closer the race, the more problems we find.

I leave in the car the gift bag and I change my clothes to be ready for the race. I put the phone in the car, so from now on I’m disconnected from social networks,

I will not be able to count how well heat up, or as stumbling with 5 runners while I write a twitter, and as I run to find a bathroom in 0:00:20 because previous race nerves. 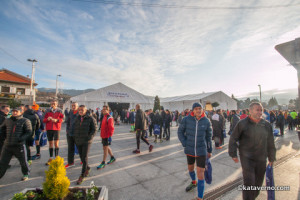 Now it is when you go out and see the real atmosphere of the Christmas Race Cercedilla, the party atmosphere, with people coming to run, to compete, but also to have fun, and enjoy a Sunday morning outdoors. I see people with wigs, dressed with Santa Claus hats, but also people warming up, ready to compete, and that’s the beauty of this race so close to Christmas, which brings all type of people determined to compete, to run,  with other people that has come here to enjoy a morning with friends, greet each other before the holidays, and then enjoy a few beers together.

At the end we discover a bit the true spirit of racing, people competing, with other people who only seeks fun one morning, share a route with friends, or simply finish a race, and then take a snack in good company 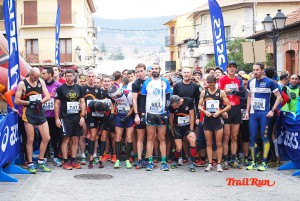 And while these people are going positioning behind an arc of beginning and arrival, start and finish, so close together, but separated by 15 long kilometers, to some less than an hour, others almost two hours, and for less lucky, mean a simple withdrawal. But while all are positioned behind the arc, the awards than someone has to received are prepared, and others only have going to see it from afar, but certainly we not cease to admire.

And here is where it starts the race after a countdown, but is also where today I leave, because this route has already been told earlier, today I will not bore you with ups and downs, rocks, roots, sprints … Today I only wanted to talk to you about this now famous race in the Sierra de Guadarrama, with a wonderful organization, and I recommend that you run at some point in your live, enjoy the surroundings, Cercedilla, and a beautiful race.

Pictures are the property of JCDFotografía and you can check it in Kataverno and are also property of Trail Run by oxigeno. We also have videos of the race in Corriendovoy and classifications available on the website of the race.