Friday, June 26 10 pm nearly 400 people in the start line before begin a countdown to start a race in a mountain evening, are they crazy? no, well maybe some of them, but they are only meeting to start running and turn on the bright eye leading into the center of their heads. It is the third edition of the Navacerrada Night Cross.

Two hours ago I was at home relaxing with a glass of water and chatting, 1 hour before the race we went to the sports center of Navacerrada to pick the numbers, where we found a large queue, but quickly the organization in charge of dissolving, telling people their number, and redirecting them to a table or another.

We already have in hand the dorsal and we move to dress up as runners, sneakers, jeans, front light, everything you need in a race. And we’re going to the start line, where we do a very slight warming, so light that barely saw. 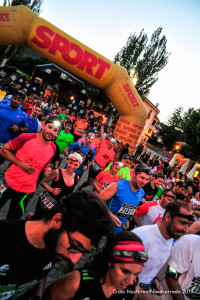 Everybody ready and waiting for the start signal, we begin well placed in the back of the pack and without strain, knowing that the start is downhill, we jump quickly to try to get a good position in this time in the race. The dump receives us with a cooler night, around the 10 p.m, with the lihgt we don’t need the use of frontal light yet.

But hey, I get well and do what we came to do, running, and running cross the dum above road Reajo del Roble, cross the road, and facing the small climb to enter the Reajo, we cross it to head towards la Dehesa de la Golondrina. The continuous rise in the Dehesa, leads to the first supplies, where we expect some bottles of water before a small but rapidly falling, which is the eve of the hardest climb of the race. The climb to el Cerro de las Ruedas by los Rasos de la Majadilla, an average gradient of 40% in about 450 mts.

And so to Navacerrada again in the roundabound of the M-601, enter the village by the sports center, and I in my ignorance, I think we’re nearly finished now, but when arriving at the Plaza de Toros, and twisting back to school, I realize that we will again surround the dam,

, blissful ignorance of the race route.

And so we go to another of the many entrances to finish skirting the dam and back to the square for el Paseo de la Magdalena, in slight increase of almost 700 meters.

Thank encouragement received throughout the race, especially for the volunteers, as well as participants of the GPT, they were going out then and encouraged us as if we were real heroes, when heroes were what it would start to run in less than one hour.

And the finish line, as always makes you feel like you’re a great champion, with all the people waiting, and cheering, and the kids waiting a clap from the runner. Although truth is that all those who have run the race, have been a very great heroes.

Here are the rankings.

Here you have a track that is not mine, as my Garmin began turning off and the first 4 km are not registered.