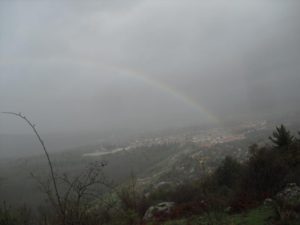 On Sunday May 8 at La Granja, I had a run, the VI Peñalara K-22 at 9 am. Weather expectations were fulfilled to the last drop, rain, rain, and if it can be with windy better. And with these expectations I got up on Sunday, rather woke up on Sunday and heard loud and clear not a voice that told me where I was going at that hour of the morning, but I heard loud and clear water falling out. Still I don’t know where I got the strength to get up, but I got it, I took the car and headed for La Granja.

In the end I came to La Granja, and my hopes that the other side of the Sierra miraculously the rain had decided not fall, became a dream, there it was raining. Well, then I went to the new site provided by el Centro Nacional del Vidrio to the organization for the start, that we were sheltered from the rain as we got out, but then as soon as the race started, it hardly mattered us be dry or wet. 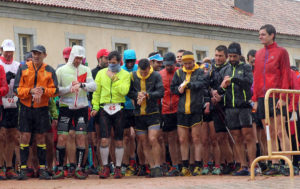 And with this scenario, Began the race with some delay due to trouble of putting all about, control chip, and other things under the rain. The start, a little more distant from the original, gave us a few meters more of race, to the already if long distance from the race, but was no time to think about it. According to the start we were given continuous rise and launched in parallel to the wall of the gardens of La Granja to Esquinazo, 2 km climb to warm things up and getting soaked with the water. 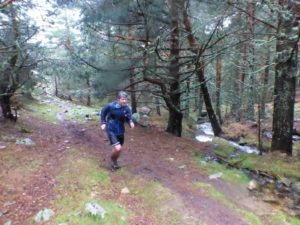 From there we have a down and with the first slips to la Fuente de la Plata, and from this, we have the first hard climb towards the Silla del Silla del Rey o Moño de la Tía Andrea. This climb i did it walking like everyone with whom I’m in this part of the race, as the average gradient of 22% prevents me climb otherwise than this. At above 1680 meters approx, we wanted to sit in the Silla del Rey, but the race is the boss, and now we have a small descent to the Salto del Corzo to regain strength and to rise again for 2 km towards the Arroyo de la Chorranca and antennas Raso del Pino, at which time we go down to the Majada del Tío Blas, and to the Fuente de la Plata again, is 5 kilometers, with air, rain and mud, are made more difficult than they normally would. 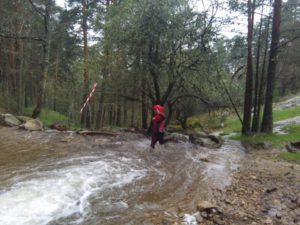 It is a down keeping balance, dodging mud, crossing rivers, that is not nothing we imagined we could find all we were here at this point in race. I arrive at the Fuente de la Plata, and take the opportunity to stop and take off some stone of the shoe, as normal after sinking the entire leg in the mud in some areas. Eating something in the food supply, and gather strength to stop the last climb to Fuente Infantes. 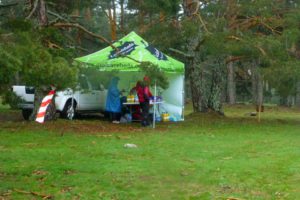 Now i have 4 km climb to Poyo Judío first and then continued to Fuente Infantes, a continuous rise, where the last thing I do is run, and what is more walking. And so we come to Fuente Infantes, on the highest point of the race, where I take the opportunity to pick up some water from the fountain and throw through the firewall to the Peña del Berrueco, the area least known of the race, and the only time I tried this route, I could not complete by my fatigue. This time I will go cool, tired yes, but cool at temperature and the rain not to stop ;-), and I believe that almost everything would be down, but I still have a surprise on my way to the Chorro Grande, this is certainly good season to visit.

And my surprise still has no end, leaving the Chorro, and returning to the Granja, I saw a climb that takes away the desire to run, an animal ramp for this momento of the race, but once saved, if that leaves us and finally running downhill toward the goal for about 2.5 km, and there I drawing strength from no where, I get down to an average of about 5 m / km. 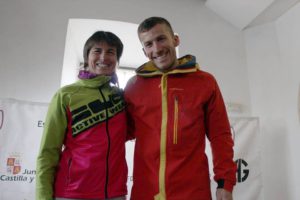 At the end I get to the goal very happy to have finished this race and adventure, on a day with a very hard time, but improving the only time I tried to make the same path. Thank all the volunteers and organization the good signaling of the race as well as his endurance over time it did, encouraging, giving us supplies, and controlling everything.

As a summary comment that won Alfredo Gil and Nuria Dominguez, here are the rankings, and some albums with photos of the same, on the page of La Acebeda and in the album de OTIUM Educación y Tiempo  Libre.

Finally, I leave the track and a small video.