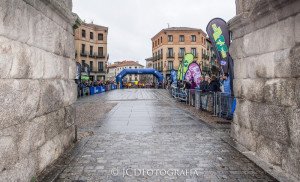 This past weekend I was in Segovia, and as you can see in the picture, at the bottom, between the arches of the Aqueduct, about 1000 crazy runners were ready to begun the V Carrera Monumental Cébé Powerade Ciudad deSegovia. Tourism will already come later.

First thing, the day in Segovia was quite unpleasant, but if we are in February!, if the bad thing of this time we have is that we have forgotten what time of year we are, and perhaps we expected a race with 16º C, as previous weeks, but no, it’s winter, and we are in Segovia, so although we were surprised by the weather, it was not so bad, was a wintry day in Segovia, to host the V Carrera Monumental Cébé Powerade Ciudad de Segovia.

The race, for me, begins leaving home, because i had seen we can pick up our number until one hour before the start of the race, and I was out of Navacerrada, at 9:15, then I had 45 minutes to stay in Segovia, and pick up my number, in the end everything was perfect because at 10:00 I was picking up my number, but then you can pick up your number until almost the beginning of the race. 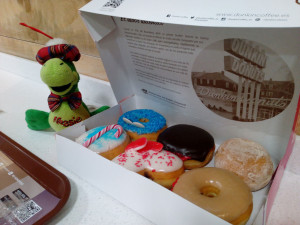 First is a light breakfast to be getting ready for race, indeed, I had eaten breakfast before, this was for the family who patiently accompanied me. And I say patiently, as the weather was not exactly affable, upon arrival was chilly, which is a generous way of saying that it was cold. Of course, for those who run the cold is a disease that as we warm up, disappears or at least becomes more bearable, but relatives sufferers have to endure while we running, and then while watching people finish and more people arrive and sometimes even more people, waiting for our triumphant arrival, even in the last position, but for us it is always triumphant, hehe.

The career as the name suggests, V Carrera Monumental Cébé Powerade Ciudad de Segovia, is a journey through the city of Segovia and its monuments, which I could start naming, but are more than 40 monuments, so I only can advise you that another year you will feel encouraged to run this so interesting race.

The start was as always in this type of races, many people running and trying to gain a foothold, approaching to a very comfortable down in more than 2 kilometers to the Santuario Virgen de la Fuencisla, from this moment begins la Cuesta de los Hoyos, just over one kilometer climb, and that’s the hardest climb of the whole race, but you can dot at constant cadency, then with a slight climb we headed to the Alcazar, which we cross in a good pace, to continue up to the Palacio Episcopal. 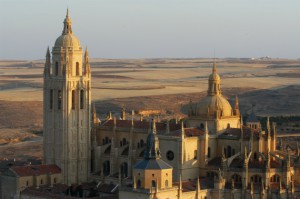 From this moment we have another 2 kilometers by a rather flat terrain, or similar, and relatively flat terrain, we reach twice and in two different paths to the Plaza Mayor, and see the Catedral de Santa María de Segovia, also known as the Lady of the Cathedrals for its size and elegance.

From this moment we have a slight drop, and that not everything is running in cold, it begins to rain, a little more force rain, and it not leave us until the end of the race.

After the descent we climbed slightly to San Millán, and from there and in a straight of 400m in light ascent we running along Avenida Fernandez Ladreda to finish again the race in the Plaza del Azoguejo. Thanks for the encouragement of all the people of Segovia during the race, and the screams of my family in finish line to see them on arrival. 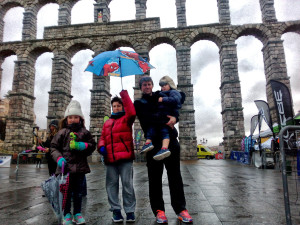 After the race, and being in Segovia, what better way to continue the day between rain, clouds, and sun than doing some tourism in Segovia, visiting the Cathedral, now without hurry, walking and not running through the streets of this beautiful city and enjoying a Sunday in Segovia, because to enjoy a city and its monuments do not need heat and sun, having fun as a family, any day is good.

And of course, I leave the race track, and a video of it.