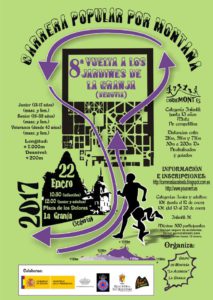 The VIII Race to Jardines de la Granja, is a short mountain race, very short, it does not reach 7 kilometers, but it should also be said that it is very intense. If you freak out the race almost finish while you’re still running inside the Jardines. This year, for example, the VIII Race to Jardines de la Granja was no exception, winner Alvaro Martín Castro took 28:51 to complete the race. So if you want to finish well rated, you can not give yourself a second of relaxation

This time the day had dawned sunny, but that did not prevent that the temperature in the Granja at 12 noon would be around 2 or 3 degrees, ie expect a cool day, but you already know that once you run you warm, and you can endure almost everything. Although each runner usually takes shelter according to what he considered necessary to be able to finish the race in good conditions. While we wait for the begin, we are informed that on the route we will find ice, so that we are careful. 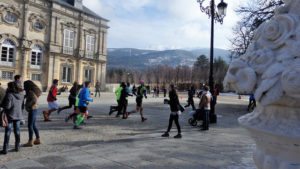 We left punctually at 12, and as we said earlier that it is an intense race, the exit was very fast. Everybody tries to catch quickly a good position, although in this race there are not many agglomerations. And before we know it, we are running inside the Jardines de la Granja, there we find a very small layer of snow that is not well known if it is snow or ice. And after those first 2 kilometers through the Jardines, we arrive at the exit of the same, to start climbing on the side parallel to the wall, here is where we find ice, which makes the climb a bit more difficult due to slips, but little a little and with the care that you can have when you are in a hurry, we arrive at the first corner, where we have a small descent to be able to recover a little. 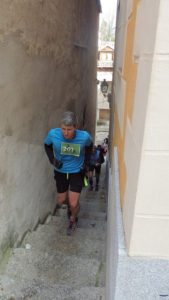 And after recovering, we have the two hardest climbs of the whole race until the corner. This part is where you find more snow than ice, which is easier to run than on the ice, since you only have to look for soft snow to avoid slipping. And on arriving at the corner, this time for safety, we continue to climb a little more to get better down by the Camino de la Silla del Rey, because due to the existence of ice, we are made to go down this road, instead of between the stones frost on the other side.

Down on the snow, which is soft snow and does not present any difficulty, towards the Granja, where there is only up the steps, as a final effort before the descent to the finish line. Where we finish the VIII Race to Jardines de la Granja.

As a summary of the race the wonderful organization of it, with which year after year the Grupo de Montaña la Acebeda does not disappoint us in the least. The path with a very good signage at all times, with marks or volunteers giving the necessary indications so that you do not leave the path, warning of the dangerous areas so that you take a better path, diverting the race if it is necessary for the dangerous ice, helping you In the goal to take the chip off while you are still recovering from the effort, and of course, the snack piece then to finish replenishing the forces. Do not miss anything, Chorizo, cheese, drink, sweet, fruit, ….

In the following link you have a first selection of photos, as well as in this link, the classification of the VIII Race to Jardines de la Granja.